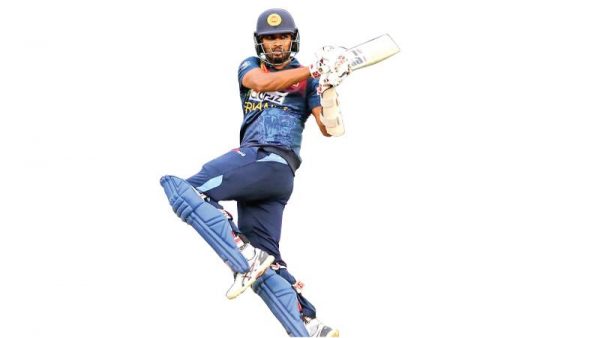 Sri Lanka captain Dasun Shanaka came like a bolt from the blues hammering an unbeaten 54 in just 25 balls as he helped his team chase down a 177-taget to win the third and final T20 International against Australia at the Pallekele Stadium in Kandy yesterday.

Shanaka was at the crease when all seemed lost for Sri Lanka at 108 for 6 in the 16th over and Australia sensing victory.

But then came what Shanaka is capable of doing as he struck the best bowler in the series Josh Hazlewood for two sixes and two fours in the 18th over to turn the match on its head and take Sri Lanka to victory that was brought up with a last ball wide from Jhye Richardson.

Shanaka in all struck five fours and four sixes that hit the Aussies off the rails.

But having won the first two matches, Australia won the series 2-1.

Sri Lanka could not get off to a desired start as opener Dhanushka Gunathilaka was caught on the fine leg boundary after clouting a six and a four for a contribution of 15 in the second ball of the fourth over with the total at 25.

Charith Asalanka replacing Gunathilaka played and missed the initial deliveries bowled at him and could not go beyond a score of 26 in 19 balls the result of playing a casual shot to a ball from medium pacer Marcus Stoinis that ballooned up for the catch to be taken at square leg by Aaron Finch.

With co-opener Pathum Nissanka’s dismissal for 27 with the total at 81 in the 11th over, Sri Lanka lost their way as Kusal Mendis continued with his miserable form able to make just six runs in eight balls.

Earlier Australia deciding to bat first after bowling first in the previous two games, phased out their innings wisely as they lost five wickets in the process to end up with a total of 176 for 5 in the 20 overs.

The sixth wicket pair of Steven Smith (37 not out) and Matthew Wade (13 not out) produced 27 runs in the last two overs bowled by Chamika Karunaratne and Dushmantha Chameera who gave away 46 runs in his four overs.

Smith hit two sixes and two fours making his 37 off 27 balls afer a sedate start with Australia four down for 84 at one stage.

Smith and Marcus Stoinis (38) salvaged the innings with a stand of 48 in only 5.4 overs before spinner Praveen Jayawickrema seperated the pair by having Stoinis stumped by Kusal Mendis.

Stoinis made his 38 in 23 balls with three sixes and a four.

Openers Aaron Finch (29 with five fours) and David Warner (39 with six fours) gave Australia a brisk start with 43 for the first wicket in 5.4 overs.