Extraordinary ruins of Kadurugoda Temple in the Northern Province 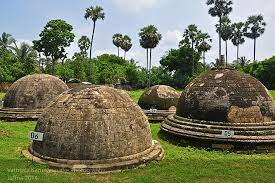 Located approximately 10 kilometers from Jaffna City, Kadurugoda Temple and Ruins are found on the outskirts of Jaffna city in Kantarodai. The Temple and ruins are one of the few remaining Buddhist legacies in the Northern province. In 1917, Jaffna Magistrate Paul E. Peiris reported that bricks from the location of the Temple were being carried away in cart loads by residents in the locale to construct houses.  Magistrate Peiris has documented approximately 60 gray coral-stone dagobas (stupas) at the site. Yet, at present there are approximately 20 stupas sprawled across an acre of open land under palmyrah trees (Borassus flabellifer).

According to locals, the name “Kadurugoda” had derived from “Kandavurugoda” (in Sinhala meaning location of a military camp) which was adopted as “Kantarodai” by the resident Tamil population of the locale.

A unique feature of this temple is the existence of small multiple stupas, instead of the usual single large stupa. According to folklore, these stupas had been constructed enshrining the remains of 60 *Arhat Bhikkus who passed away while fleeing the harassment of King Sangili who ruled the Jaffna Peninsula during that period.

The stupas of the Temple possess unique features not found anywhere else in Sri Lanka. They have been constructed of gray colored coral stone. These ancient stupas do not possess the standard square shape portions above the dome found in the majority of stupas in Sri Lanka, instead umbrella shaped fixed pinnacles. These stupas have a very distinguished design with small cavities all over them. The largest stupa is approximately 23 feet (approximately 7 meters) in diameter and the smallest stupa is about 6 feet (approximately one meter). Most of the stupas have only the foundation.

According to scholars, Kadurugoda Viharaya has been one of the places *Arhat Sangamitta had visited during her journey from *Dambakolapatuna to Anuradhapura to deliver the sapling of the *Sri Maha Bodhi to *King Devanampiyathissa (Reign: 247 BC – 207 BC).

During excavations carried out by the Department of Archaeology from 1917-1919, remains of a shrine room, parts of Buddha Statues, Bodhisattva Statues, foot imprints of the Buddha and coins belonging to pre-Christian era had been unearthed.

According to interlinear inscriptions read by *Professor Senarath Paranavithana, Kadurugoda Temple was constructed by a prince of the *Shailendra Dynasty of the Sri Vijaya Kingdom.

At present, the Temple has been declared an archaeological site protected and maintained by the Sri Lankan army.